Raising a trilingual kid ? Isn’t he gonna be confused by all these languages ? Since you are always traveling, how are you educating him? We often get these questions and today we aim at answering these few common questions. We will also explain how we are trying to transmit as many languages as possible to our son. We don’t believe in monolingualism.

Why teaching our son multiple languages?

We feel that languages are invaluable gifts that we can give to our son. Both of us being trilingual we know how valuable being multilingual can be, and we also know how hard it can be to learn a language during adulthood!

Speaking multiple languages is a major asset in terms of career prospects, relationships as well as learning further languages later on. As we believe our role as parents is to provide our son with as many tools as possible to achieve his future dreams, teaching him the languages we know was a no-brainer.

Raising a trilingual kid, is it a realistic objective ?

When he was born, we agreed on trying our best to raise a quadrilingual kid : we hope that he will become fluent in Cantonese, French, English & Chinese Mandarin. Most people can speak one or at most two languages fluently, so the thought of raising our son with a native proficiency in 4 languages seems like a utopian dream!

The earlier the better !

Studies have shown that early childhood is the easiest time to learn languages. It seems like there is a critical period from birth to 6 year-old where children are learning like sponges. Therefore we’re putting a lot of efforts into teaching him as many languages as possible while it is still easy and effortless.

If you are an adult who has tried to learn another language you will probably know what I’m talking about. It takes a lot of lessons and practice before being able to master another language. And even after all these hours it’s unlikely that you could reach a native level! Sadly I came to terms with the fact that I’ll always keep a French accent while speaking English.

So which language do you speak to your son ?

Therefore one of the most common questions people ask us is “Which language do you speak with your son?” They often assume that we speak in English to him, since it is the language we use to communicate with each other. But we chose to teach our native languages to our kid first, French and Cantonese, and then continue with two more languages.

Why Cantonese and not the more popular Mandarin ?

At his birth, I actually asked HiuYing to speak to our son in Chinese Mandarin, as I believe Mandarin would be more useful since there’s more than a billion speakers compared to 100 millions Cantonese-speakers. Cantonese-speakers usually all speak another language, mainly Mandarin Chinese in China and sometimes English (in the USA, Canada or in Malaysia for instance).

She told me that Cantonese is more difficult than Mandarin, and people who have learned Cantonese later in their life always keep an accent, while China is so huge and diverse that Mandarin can be spoken with a few different accents. She just felt more confident transmitting her native-language rather than Mandarin, in hindsight I do believe that Cantonese was the best option.

How do we teach him multiple languages ?

One Parent One Language

The base of our education is to have one parent speaking only one language to Darian. We both chose to teach our native language to our son, respectively French and Cantonese. We try to never switch to another language while we’re speaking directly to him. As we’re traveling around the world, we’re living constantly together, therefore he can get an equal and sufficient amount of exposure to both languages.

First checkpoint: After 2 years and a half, we noticed that his Cantonese skills are impressive and ahead of his French. Probably because he’s spending more time with his mom, and also because we recently stayed longer in Hong Kong where he’s surrounded by Cantonese speakers.

Second checkpoint: Now Darian is almost 4, after spending the past year in Europe and mostly in France, his French skills overtook his Cantonese. He still has a lot of exposure to Cantonese through her mom. His English became much better to the point where my wife and I cannot talk in English in front of him without him understanding. We noticed in our travel that he started to use English with people who couldn’t speak French or Cantonese.

We were worried that his speech would be delayed, because it seems to be the case for some children who are exposed to multiple languages. Turns out it wasn’t the case at all, and his speech is actually ahead for his age.

When it comes to English, we had no doubt that he’ll be able to learn it. In my opinion, English is actually the most important language for him to master. As a French native speaker, I truly know how many opportunities speaking English opened and will open to me. If I didn’t speak English, I would probably not be in a relationship with a girl from Hong Kong, let alone all the travels I was able to do, or my online teaching job.

As much as I did practice and learn English, you can probably notice that I still haven’t reached a native level. I truly started to learn English when I was in secondary school at the age of 10. Already too late.

English being the language that HiuYing and me use to communicate, Darian is always exposed to this language, even though we never speak it directly to him. By age 2, we noticed that he started to react to things we said in English. For instance, I would say “HiuYing, do you wanna eat?” and our son would look at me and tell me “manger” which means to eat in French.

His English skills improved a lot by visiting countries such as Malaysia and the Philippines. Cantonese and French are not so common there, but most locals have a good command of English. We sat down and watched Darian trying to have small conversations only in English with others!

His favorite sentence? “What is this?”, that he could use all day long in order to learn new words! We couldn’t help but notice how excited he was to use this language.

We try hard not to answer in English to him

He also tried to use the language with us, but so far we gave very little response, in order to discourage him to use English with us.

One of our concerns is that, if we start to speak English to him he’ll just start to think that Cantonese or/and French is useless since he can communicate in English with us and many other people. Why would he bother to learn two more languages then?

He’s very young, we know that things can change quickly, therefore we try to be careful and stick to our plan. With the amount of English materials out there and the fact that we’re always on the road meeting new people, we think that it would be enough for him to reach a native level in English.

We also notice that he’s quick to get used to a new environment. When he doesn’t know which language another person speaks, he will usually start in English. If that person answers in Cantonese or French then he will make a switch.

You might have noticed that we didn’t speak about Chinese Mandarin. Well, he has already been exposed to it while we were in Taiwan for 2 months and a half, he still remembers a few words such as “Thank you”. We’re planning to be in China soon and we will use this time to introduce him to this language.

Darian’s grandmother has a native level of Chinese Mandarin so we might ask her to switch from Cantonese to Mandarin while speaking to him on the phone in order to increase his exposure while we’ll be in a non-Chinese speaking country. We also know that learning Chinese is a much easier thing to do when you’re able to speak Cantonese, so we won’t push too hard.

A perfect option could be to enroll him in a Chinese school or daycare later on if we decide to settle for a longer period somewhere. That would surely boost his interest and ensure that he’d reach proficiency in Chinese.

Another advantage would be to start his writing skills. One of the hardest parts of Chinese and Cantonese is actually the writing. Students in Hong Kong start to learn how to write characters at only 2-3 years old, which is much younger than what we do in France, where we learn how to write at 5-6 years old.

We’ll be ecstatic if he manages to reach a native level in these 4 languages. We know how much of an advantage that would be for his future. Since he lived 14 of his first 15 months in Latin America, he has also already heard a lot of Spanish. Maybe this exposure will come handy later in his life if he decides to learn a fifth language.

It’s still very early in the process though, and we know that he could forget a language even faster than he learned it if he’s not exposed enough. After a couple of years doing our best, we’re happy to see the first results in his speech, and it gives us even more strength to continue on this path. After a two years and a half experience, we have even more certitude that we will manage to raise a multilingual kid !

And what about you? Do you wish your parents had taught you multiple languages when you were kids? Are you raising a trilingual kid? Feel free to comment below !

The most essential item for budget travel with a baby PLUS a bonus item for breastfeeding moms!

Couchsurfing with a baby : Find a host

Taking the Trans-Siberian train with a toddler 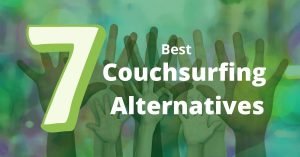 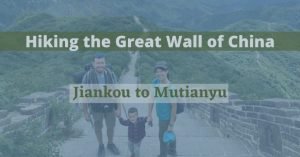 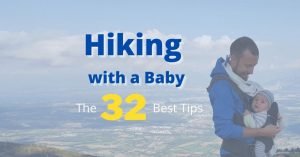